Police chase suspect through golf course and into lake 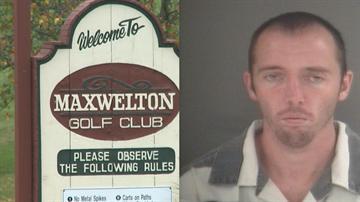 SYRACUSE, Ind. – A drug bust led to wild chase for Syracuse police Tuesday evening.  At around 7:30, undercover officers from the Syracuse Police Department and the Kosciusko Drug Task Force allegedly bought meth from 30-year-old Justin Simpson, of Goshen, east of the intersection of County Line Road and State Road 13.  When officers moved to arrest Simpson he fled on a scooter.  After pursuing Simpson for about one mile, he turned onto Maxwelton Golf Course.  Officers followed Simpson onto the course as he drove through holes 12, 4, 15 and 16.  Maxwelton owner Bob Carlson inspected the course on Wednesday morning.

“I was pretty concerned about the golf course, knowing that a couple of vehicles and, I guess, a scooter went across it,” Carlson explained.  “But, fortunately, this morning we found there was no damage at all to the golf course.”

Syracuse Chief of Police Anthony Ciriello informed Carlson of the chase after it ended.  Thankfully, no golfers were on the course at the time and the chase didn’t affect sensitive areas.

“The chief of police and the other officer who was part of the pursuit both are familiar with the golf course and they knew there were no greens or tees or bunkers involved in the chase,” explained Carlson.

According to Carlson, Simpson drove across the golf course with two police cruisers in pursuit.  Then, Simpson drove off the course and across Northshore Drive.  He then drove through yards of neighboring homes and eventually between two houses.  After crashing his scooter he fled on foot through Dale Allen’s backyard which is on the shores of Syracuse Lake.

“I looked out and I saw people running down the hill,” Allen described. “Toward the lake, they ran down on our pier and then I saw what they were doing, there was someone in the water.”

Simpson jumped into the lake and swam out 20 to 30-feet, according to Allen.

“They had him pretty well trapped and it was pretty cold out there and, I don’t know, he was probably pretty chilled.”

Officers stood on Allen’s pier and shouted for Simpson to come back to shore.

“He finally did swim into shore and they got a hold of him and brought him up,” Allen explained.

The chase had lasted 10 minutes, it was a bizarre scene that people in Syracuse weren’t expecting.

“It’s nothing we’ve ever had before but then life is full of that,” explained Allen.

Back at Maxwelton, Bob Carlson said he’s happy nobody was hurt and no damage was done to his course or the homes on Northshore Drive.

“Now that they’ve caught the bad guy, and there’s no damage to the golf course, it could be, maybe a little bit on the humorous side,” explained Carlson.  “But, I understand he was not a very good sort so we’re happy that the policeman had pursued him and caught him.”

Simpson is currently in the Kosciusko County Jail on charges of dealing methamphetamine, fleeing police and criminal mischief with a $20,000 bond.