Police fatality report: Car accidents among top cause of death 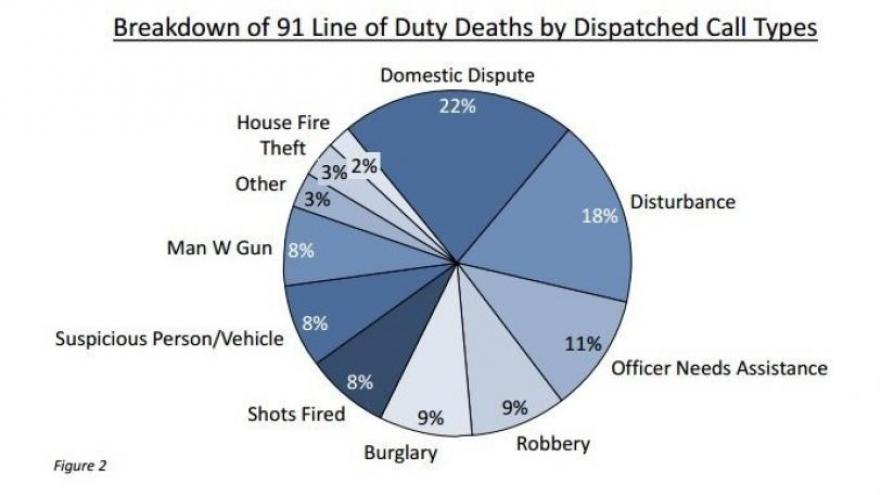 (CNN) -- Traffic-related accidents and unprovoked attacks account for a majority of police officer deaths from 2010-2014, according to a report released on Friday.

A study by the National Law Enforcement Officers Memorial Fund examined the deaths of 684 police officers over a five-year period found that 272 officers died from being in an automobile crash or being struck by an automobile. A further look at these incidents found that "a large number of the crashes investigated were not related to either a call for service or a case of self-initiated activity," the report said.

The report urged law enforcement agencies to encourage their officers to "slow down when responding to calls (specifically, Officer Needs Assistance calls which led to 53% of officer traffic-related deaths), wear seat belts, and wear issued body armor" to reduce fatalities.

Overall, law enforcement deaths in 2015 increased by 1% over 2014 and a 9% increase over 2013, according to the report. Out of the 123 officer deaths last year, 48 were caused by traffic-related incidents and 41 were the result of shootings.

The second-highest number of police deaths, at 134, occurred not in the course of responding to an emergency call, but are attributed to officers being "ambushed" while performing tactical operations, serving warrants or while carrying out follow-up investigative work, the study found.

Of the 91 officers who died while responding to a dispatcher's call for service, a majority of those were in response to reports of domestic disputes. And in 45% of those fatalities, officers had been advised by a dispatcher that the suspect might be armed or made any threats. The report stressed the need for better communication between dispatchers and officers responding to calls and also, a heightened awareness because of routine dispatch calls sometimes being used to lure officers into ambush style attacks.

Forty-one officers were killed during a self-initiated activity, or during actions such as "conducting traffic stops for speeding, engaging in enforcement of ordinances, or investigating suspicious activity," the report said. More than half of these fatalities were the result of a traffic stop, as opposed to checking out suspicious persons or disabled vehicles.

When looking at the 132 deaths of officers who were responding to dispatcher calls and those self-initiating investigations, 129 died from gunshot wounds. The other three officers died as a result of being stabbed, run over by a vehicle or being pushed from an elevated area.

With the aim of augmenting current policies and mitigating the types of scenarios that lead to officer deaths more frequently, the report had a timely release as the conclusion states it was "being finalized, the nation is reeling from the ambush shooting deaths of five Dallas, TX police officers, followed days later by a similar attack on uniformed officers in Baton Rouge, LA in which three officers were killed."