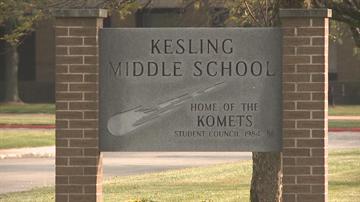 LA PORTE, Ind. – A 13-year-old Kesling Middle School student is facing felony charge after police found half a pound of marijuana in his locker at the school Friday morning.

According to the La Porte County Sheriff’s Department somebody tipped off the school’s principal that an 8th grade student had pot in his locker.  During a search of the student’s locker school officials found a plastic bag of weed in a backpack along with a pack of cigarettes.

A sheriff’s department officer came to the school and conducted a test that positively identified marijuana in the bag.  The student admitted that he was the only person with access to his locker and that the cigarettes belonged to him, but denied that the pot was his.  The student was arrested for possession of marijuana and, because he’s accused of having over 30 grams of it, is facing a class “D” felony charge.  According to the sheriff’s department’s report the officer found 226 grams of weed in the locker.

Strand and most of the other parents ABC 57 spoke to said the case shows the importance of parents talking with their children about La Porte County’s drug problems.

"We talk a lot about those kinds of things and so far, you know, I feel I can trust them,” Strand said of discussing drugs with her kids.  “But, it's still scary to know that that's so close."

Additionally Strand and other parents were upset that they hadn’t heard about the incident from the school and only found out after being told by ABC 57.

"As a parent I would've like to have known,” Strand explained.  “I don't know if it'd really change a whole lot, but at least maybe some parents that don't educate their children would then be like ‘hey, maybe we need to have a talk.’"

Officials with La Porte Community School Corporation could not be reached for comment on Tuesday.