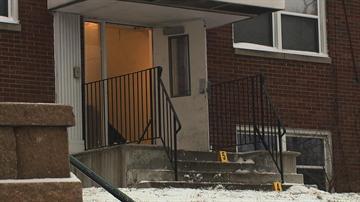 Police said Caradine’s son found her body in the bathroom early Wednesday morning where police arrived on the scene just after 3:30 a.m.

Caradine’s car was missing from the scene and it was found abandoned at an ATM in Chicago.

Investigators left for Chicago just after 4 p.m. to tow the car back to South Bend for evidence.
People who knew Caradine said she was a hard worker and loving mother of two teenagers.
Police said there is a man they want to question who is believed to have driven the victim’s car to Chicago. Police wouldn’t call him a suspect.
Neighbors said the man in question started coming around about three weeks ago, and some at the apartments said they think Caradine was a victim of domestic violence.
“This is something that had to come from out of nowhere. I don’t even know if she had time to see the warning signs, if you would,” said R. Ellington who both works and lives at the apartments.
Police said they couldn’t confirm how Caradine was killed and that an autopsy was still being performed as of late Wednesday afternoon.
No one is in police custody as of Wednesday night.
Share this article: