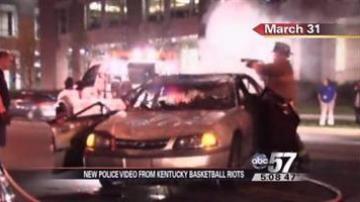 LEXINGTON, Ky. – The celebration that broke out after the UK Wildcats won the NCAA basketball title was taken a little too far.

Now police are going high tech. They're trying to find those responsible for the final four riots. Video from the Lexington Police Department's helicopter camera shows a car was turned into a fireball.

Officers say video like this one has already proven useful in at least one case. A Kentucky freshman was charged with arson for setting the car on fire.

"I was like, who does that? Who lights their own clothes on fire to set something else on fire?” said UK Junior Teresa Osborne. “II was so happy, I was ecstatic. I was shaking and I honestly didn't believe they were going to catch him."

Police say they hope to use the video to identify more people involved. Over 100 fires were set after the Kentucky basketball team won the championship.