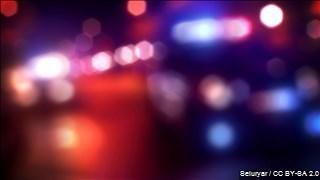 The first shooting happened around 3:00 a.m. Saturday in the 2400 block of Middlebury Street at The Arena when police say it was clearing out.

When officers were walking in the area, they say they heard several gunshots come from the west end of the parking lot.

That’s when officers made their way to the west end of the parking lot as people began running and driving from the area.

Police say there was no damage at the scene and no injuries were reported.

Several shell casings were collected from the scene.

During the investigation at this scene, officers were dispatched just a few blocks away to the 1500 block of Toledo Road at the Village Pantry in regards to a robbery.

When officers arrived, they were told there had not been a robbery but that a vehicle was shot at.

Officers located and collected shell casings at this scene and no injuries were reported.

Police have not said if this is connected to the shooting that took place at The Arena.

However, just before 4:00 a.m., officers were dispatched to Saint Joseph Medical Center in regards to a subject that had been shot in the leg. The victim reported he was walking through the parking lot of The Arena when he heard gunfire and was shot.

Later that morning, officers took reports on vehicles that were damaged during the shooting at The Arena.

Police say a Chevy Impala was sideswiped leaving the area when the shots were fired, a Ford F150 had a window shot out, and a Cadillac Escalade had a bullet travel through the rear window, a headrest and then the windshield.

Police say no other injuries were reported and there is no suspect information.

The case remains under investigation at this time.