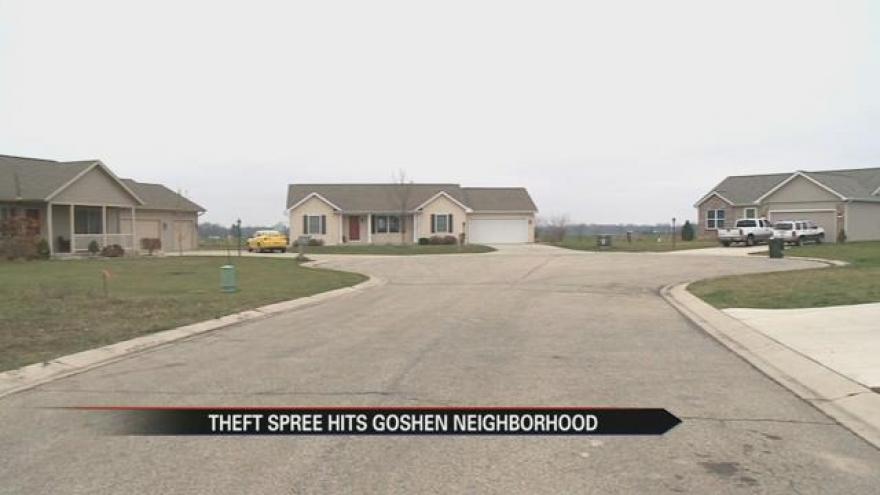 A string of peculiar burglaries happened overnight in a small Goshen subdivision, leaving residents a bit confused and a little nervous.

“This was full of cases with screw guns and isolating saws and stuff like that,” Mike Webb explained.

Webb used to have a tool collection in his pickup truck; he’d spent more than two decades building.

“It was all open – they didn’t shut anything. Even the front doors to the cab were all open,” Webb said.

Webb and his family live in the Goshen subdivision, Southfield Place.

“Around 5 o’clock this morning, one of my boys left to go hunting, and he came back in and woke me up and said that my truck was wide open and the car was wide open,” Webb explained.

His tool collection valued at nearly $5,000 was gone.

One of the Webb’s cars was broken into.

His wife’s car key and house keys were stolen.

At least four other homes in Southfield Place were robbed in the early hours of Saturday morning.

The small, sleepy subdivision off County Road 42 is home to a number of construction workers.

And their tools seemed to be what the thieves were looking for.

“You can’t take for granted anything. We got to lock everything up,” Webb said.

A number of residents said tools they had stored in work vehicles or their garages were stolen, along with random items such as car keys, garage door openers, even the registration paperwork to a car.

Ralph Larsen had his work tools stolen and his garage door was left open.

The Elkhart County Sheriff’s Department was on scene Saturday morning.

They have no update on who these suspects may be or why they targeted the area.

Nobody’s home was broken into beyond the garage.

But a number of residents have already made calls to have security systems installed.