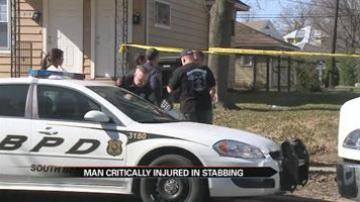 SOUTH BEND, Ind. -- South Bend Police are investigating a stabbing that happened on Portage Avenue Friday morning. Police aren't sure if the man who was stabbed lived in the home or if he was an intruder.

The woman who lives at the home on Portage Avenue ran screaming out of the home and ran across the street for help.

Dorman was taking out some garbage Friday morning when she saw a woman running towards her with a bloody steak knife in her hand.

"She said the intruder broke into her house, hit her over the head with a bottle," said Dorman.

The woman told Dorman that she had stabbed an intruder in self defense.

Dorman had to clean blood off her porch after the incident.

Police say after the man was stabbed, he ran after the woman. Then he headed north on Portage Road. He tried to break into several cars along the way.

"When the guy was in pursuit I could tell something really evil was going to happen," said Dorman.

The man who was stabbed is in the hospital in critical condition.

The prosecutor's office is expected to release further information about the incident.