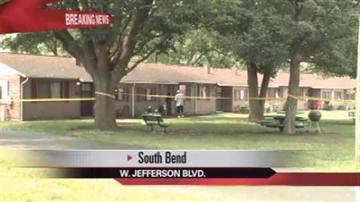 SOUTH BEND, Ind. -- South Bend Police responded to the 3600 block of West Jefferson Boulevard in South Bend for reports of a shooting around 3 p.m. Thursday.

One man was taken to the hospital with three gunshot wounds, according to police. He was shot once in the arm, once in the shoulder and once in the leg.

Police say they are looking for two suspects.