Police kill a man who took a baby hostage 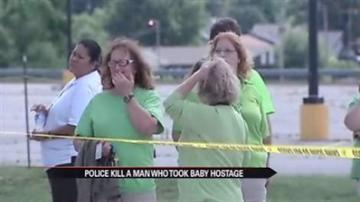 OKLAHOMA CITY -- Police shot and killed a man who allegedly took a baby hostage at an Oklahoma Walmart.

When police arrived shoppers and employees were evacuated.

Witnesses say the suspect was holding a knife and threatening the child.

"Oh my God! It's terrible. I can't even imagine what it would feel like to be that mother in a situation like that," said  Donita Owens.

Police tried negotiating with the man for more than half an hour but when he refused to cooperate, officers had no choice but to shoot him.

The child is okay.