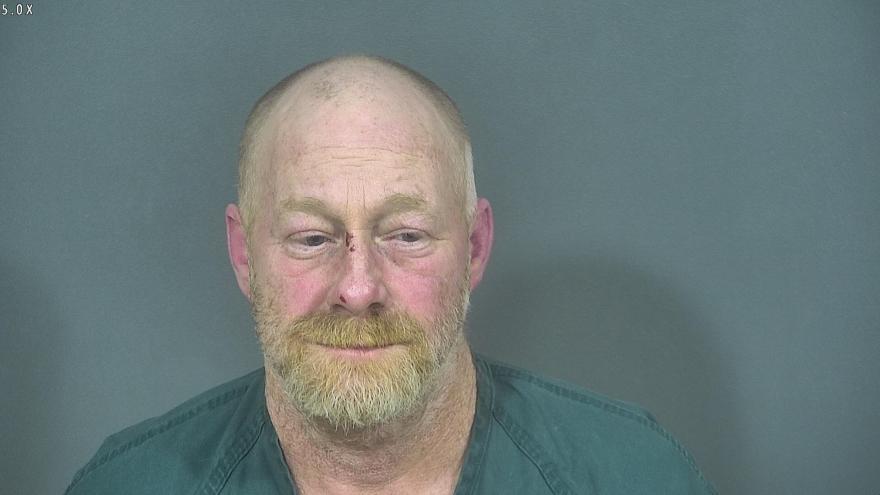 ST. JOSEPH COUNTY, Ind.—St. Joseph County Police arrested a man who allegedly yelled racial slurs at and threatened to kill his neighbor, according to the probable cause affidavit.

On April 5, an officer was dispatched to the 56000 block of Butternut Road regarding a harassment report.

The officer spoke with Keith Campbell, who said that his neighbor, 53-year-old Jeffrey Matuszak, knocked on the door of his home and asked for someone named James. Campbell told Matusz that he does not know a James.

According to court documents, about 10 minutes later, Matuszak returned and told Campbell that his dog has been getting into Matuszak’s yard and that Matuszak would shoot the dog and then said “I’m shooting your ass, too.”

Campbell told Matuszak to get off of his property at which point Matuszak attempted to hit Campbell, according to the probable cause affidavit.

Campbell told police that he then stepped back and pushed Matuszak to the ground. Matuszak then got up, picked up a pot and threw it, court documents said.

According to the probable cause affidavit, Matuszak then picked up a watering wand and swung it around and stated, “you don’t know who you’re [expletive deleted] with, you ain’t seen the last of me,” and then walked to his home.

According to court documents, Matuszak said this after Campbell allegedly punched him.

On April 6, officers were again called to the same residence on Butternut Road for reports of harassment and shots fired.

Campbell told officers that Matuszak threatened to shoot him, according to the probable cause affidavit.

Matuszak had pulled up in front of his house, blowing his vehicle’s horn when Campbell went outside and found Matuszak in his truck yelling obscenities towards Campbell, court documents said.

Court documents said that Matuszak then pulled his vehicle into his own driveway, exited the vehicle and fired several shots into the air.

Matuszak then got back into his truck and left, passing Campbell’s residence in the process, court documents said.

Officers patrolled the area in an attempt to locate Matuszak. Later that same day, officers located Matuszak at his residence.

Officers attempted to speak with him, but he shut the door and indicated that he would not speak with police, court documents said.

Officers eventually talked him into coming out of the residence. He was arrested and booked into St. Joseph County Jail without bond on three counts of intimidation.

Witnesses told police they had heard shots fired. One witness said he was present when the threats were made and shots fired.

Another witness said she heard the shots and Matuszak yelling obscenities.

Matuszak is scheduled to appear in court on April 6.