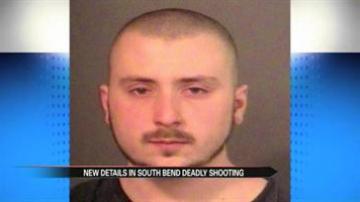 Jacob Saye, 22, was charged with murder.

Witnesses told police Saye arrived to the home at the 1800 block of South Pulaski Street with a 9 mm handgun.

They said Saye had the gun out and was playing with it throughout the night, waiving it in the air and showing it off to friends.

At one point, witnesses said Saye disassembled the gun, then reassembled it without loading it. He then allegedly pointed the weapon at someone and pulled the trigger.

A witness also said they heard Saye mention that he wanted to play Russian roulette.

Witnesses told police around midnight Saye, White and a group of friends went down into the basement. Saye and White agreed to play beer pong.

During the game, Saye allegedly asked if anyone knew what Russian roulette was.

Police said a witness told Saye that since he didn't have a revolver, he had to go first. Moments later, witnesses said they heard a shot and heard White fall to the ground.

Saye allegedly walked away from White and allegedly said he was going to jail.

After telling police multiple stories, Saye allegedly admitted that he and White were playing beer pong. He said the winner would be able to use the gun in a game of Russian roulette against the other person.

Saye allegedly told police at the end of the game he picked up the gun, put it to White's temple and pulled the trigger.

The forensic pathologist determined White died of a single gunshot wound to the head.

Friends say it's hard to believe White is gone.

"Nobody would expect it to happen to Chris. Like out of everybody from Mishawaka, Chris? Little goofy nerdy, nice funny, Chris," said Heather Kreie.

Saye was charged with one count of murder.