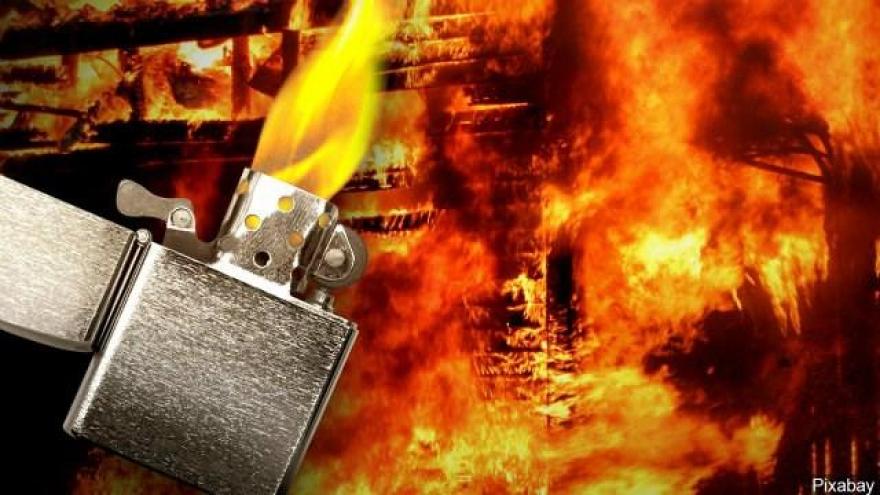 (CNN) -- A mosque was badly burned outside Seattle early Saturday, and police believe the fire was intentionally set.

The incident occurred in Bellevue, Washington. No one was in the Islamic Center of Eastside at the time and no injuries were reported.

CNN affiliate KCPQ said firefighters spotted 40-foot flames on the back side of the building. "Crews were able to save half of the building," the station reported..

"We have confirmed it was arson, but do not know a motive," Bellevue Police Chief Steve Mylett said.

Isaac Wayne Wilson was charged with felony malicious mischief and is being investigated for arson, Mylett said. CNN affiliate KCPQ said the man is age 37.

Police found the suspect lying on the ground near the back of the building, KCPQ said..

Wilson was being held at the King County Correctional Facility in Seattle, and bail has been denied. Investigators were not currently considering the act a hate crime, Mylett said.

The FBI, the Bureau of Alcohol, Tobacco, Firearms and Explosives, and Bellevue fire and police officials were investigating.

CNN affiliate KOMO reported deputy prosecutor Mike Hogan as saying "the suspect had prior contacts with the mosque."

"Police said the suspect had previously been arrested for making a disturbance at the mosque," the station said.

The Council on American-Islamic Relations in Washington state, in a Facebook post, urged people "not to jump to conclusions about the motive" and said "please give authorities time to investigate."

The group said authorities "have the situation under control" and asked people who have any knowledge about the incident or the suspect to contact 911.

The facility, also known as the Bellevue Masjid, is closed until further notice "due to the fire," its website said. A local community center was being used for prayers, the mosque said.

The mosque is asking for donations to rebuild. A funding appeal website said that over the last half-year, "this center and a neighboring Islamic center have seen numerous acts of vandalism."