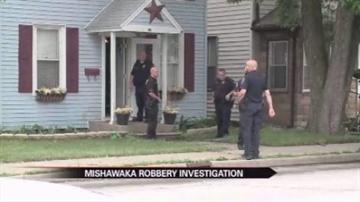 MISHAWAKA, Ind. -- Mishawaka Police surrounded a home on West 7th Street after tracking down a man suspected of stealing a woman’s purse. The victim’s daughter saw the theft and chased the suspect as far as she could.

"I just started chasing him. I didn't know I could do it. I hurled a rose bush and I got in the alley I ran a little bit and I fell,” said Cortney Moore.

All this drama unfolded while Moore and her mother Peggy Monroe were in the midst of refurbishing a house on 7th Street Wednesday.

"I moved my car over here on the side of the street and left the windows down like this much because it was really, really hot,” said Monroe.

What Moore saw in his other hand sent her into overdrive -it was her mother's purse.

"What did it was adrenaline. That's what it is and defending my mother. I will always defend my mother,” said Moore.

"There was an actual 911 call that came in around 11:45 this morning,” said Lieutenant Tim Williams of Mishawaka Police.

Which was enough to bring in a swarm of Mishawaka officers and a K-9 unit from South Bend right as the chase between Moore and the purse snatcher was reaching an end.

"I saw him cut over right here and into the house he went,” said Moore.

"While doing the track they learned the subject went into a house in the 200 block of W. 7th Street,” said Williams.

Eventually police coaxed the suspect out and he handed over the purse.

"He was identified and taken into custody,” said Williams.

"I got everything back besides $50. I got my IDs and everything so right by the grace of God,” said Monroe.

"Jobs right now are few and far in between and I mean we remodel we are working like men drywalling you name it and to see somebody do that to my mother's or family or even a stranger that ain't [sic] cool,” said Moore.

Mishawaka Police say the suspect is being held on theft charges.