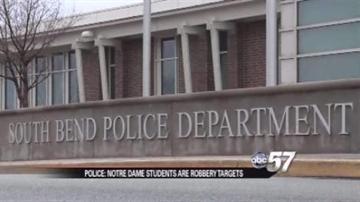 NOTRE DAME, Ind. -- A Notre Dame Student was robbed a block from her home this weekend. Luckily, she was not injured but police said the robbery was one of many they've seen this season.

Police said that the closer we get to Christmas, the more robberies they see. They also say a lot of the times, Notre Dame students are the victims.

A Notre Dame student was biking home from campus late Friday night when she was robbed on the 800 block of Notre Dame Avenue.

Police said this was one of two robberies in the area that evening. Police think the incidents are linked because of the suspects' weapon of choice, golf clubs.

According to the police report, two young boys approached the victim with golf clubs raised and demanded her money. They ran off with her backpack and purse. Police are still looking for the suspects.

They say Notre Dame students are targeted, especially around this time of year.

"I think it's pretty much known in the South Bend community that Notre Dame Students have a little bit more money than the average college student and that we might fall into a false sense of security," said Ian Duncan, senior at Notre Dame.

One student suggested there may only be one way to address the robberies and protect local college students.

Students said they understand the danger of traveling alone, they try to travel in pairs when they are going to and from school, but that it's not always possible.