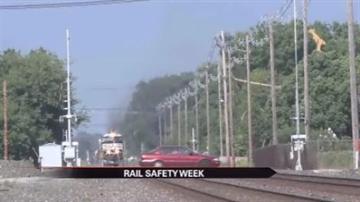 MISHAWAKA, Ind. -- Indiana ranks 4th in the nation for the number of train accidents. Mishawaka Police are patrolling the tracks looking for trespassers and reckless drivers as part of rail safety week.

Mishawaka Police say 55 trains pass through every day, most on their way to larger cities like Chicago, Detroit and Toledo.

While most drivers wait patiently, others take a chance and try to beat the train.

That can be deadly.

"That's a tragic event that happens in our community. A loss like that - it's sad," said Lieutenant Tim Williams of the Mishawaka Police department.

Williams has seen it firsthand.

"Nine times out of ten - when you have that crash with a train, you're not going to survive," said Williams.

This week, he and others are sharing that message in hopes of reversing what's become an alarming trend.

Friday morning a man and his daughter were killed in a train crash in Kosciusko County.

We rode along with Corporal Jeffrey Price of the Mishawaka Police Department as he patrolled the rails.

It didn’t take long to find someone - a woman who was trespassing.

"If I wanted to, I could take her to jail for it, but I think she was just trying to catch the bus," said Price.

She only received a warning.

Officers will be checking the tracks through Saturday night.

They're urging people to be extra cautious.