Police: Pejza's Tavern robbery may be connected to other armed robberies 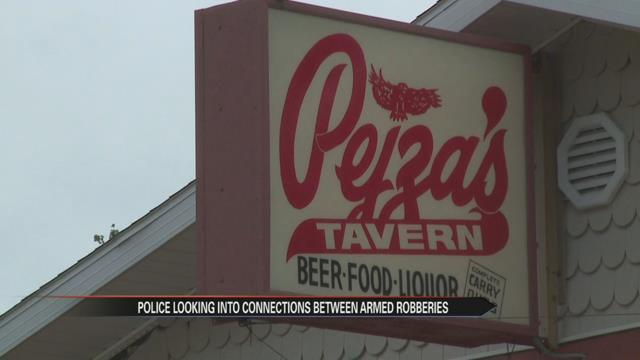 St. Joseph County Police are looking for two men they believe are responsible for a string of armed robberies at local businesses.

No one has been injured but police say, they consider these men to be very dangerous.

On August 7, surveillance video was released of the suspects robbing a Mishawaka liquor store.

On Sunday, the Village Pantry Convenience Store in South Bend was the next target.

“There are certainly enough similarities now that we feel pretty confident in saying they are connected. That’s how we’re approaching it now,” said Assistant Chief Bill Thompson of the St. Joseph County Police Department.

The latest armed robbery at Pejza’s Tavern is less than two miles away from the Village Pantry.

“Obviously this is a very serious series of incidents and we want to make sure that this gets under control as quickly as we can,” said Thompson.

And because these crimes cross into multiple jurisdictions, three police departments are working together.

“Our officers are working with officers from South Bend and Mishawaka to try and determine any leads they might have and any suspects they may be able to develop,” said Thompson.

So far police say they don’t have any suspects.

“The information that we have is that the suspects fled out the back door of the establishment, they went in a vehicle southbound on Quince Road away from the area,” said Thompson.

If you have any information on these incidents police urge you to contact Michiana Crime Stoppers at (574) 288-STOP.