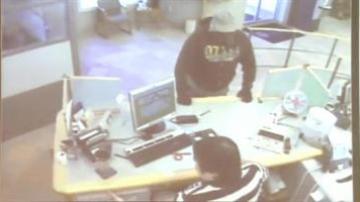 BERRIEN SPRINGS, Mich. -- Berrien Springs Police are trying to identify the man who robbed the Honor Credit Union across the street from Andrews University on September 25. In hopes someone will recognize the suspect, police have released surveillance video of the robbery.

"We've had a number of tips that have come in. Some have been tracked down already and some that have been ruled out, but we are still looking for additional information," said Detective Sergeant Patrick Teed of the Berrien Springs Police Department.

Police are hoping someone recognizes the suspect.

"Probably the most distinguishable piece of clothing is that zip up hooded sweater. It has 07 imprinted on it and we believe the design there is a city skyline," said Teed.

Police say this may not have been his first bank job.

"He fanned through the money as if he was looking maybe for a dye-pack or something. He seemed to know what he was doing. He came with a purpose," said Teed.

Investigators say that just because he didn't use a weapon in the heist doesn't make him any less dangerous.

"I would think he would have to be because you have no idea what his intentions are," said Teed.

Although he took great pains to hide his identity, police believe someone will recognize him.

If you recognize the suspect, contact the Berrien Springs Police Department.