Police save five children from house fire in Goshen 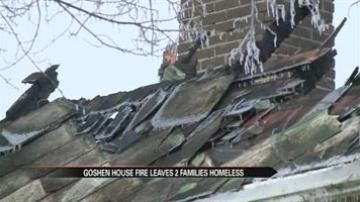 GOSHEN, Ind.-- A house fire near downtown Goshen has left two families without a home. Five children were inside the house when it caught on fire, and Goshen Police Officers were able to get them out safely.

A passerby saw the roof fully engulfed in flames and called 911 just before 8am Saturday morning.

The children in the home were between ages 4 and 12, and their mothers said they were taken to Goshen Hospital to be checked out.

Ten-year-old John Young was sleeping upstairs when the fire in the attic broke out.

He said flames were everywhere and he felt trapped upstairs because he couldn't breathe.

John Young said, “I was just hoping I got out in time without getting burned or something.”

Young said he was able to open a window upstairs and he began yelling for help. Goshen Police Officers got the children out of the house before firefighters arrived.

Young said, “He grabbed me, and carried me down the stairs and put me in the car, and the ambulance got here and they checked me and made sure I was okay.”

Young was sleeping upstairs, and four other children were downstairs.

Batallion Chief Scott McDowell with the Goshen Fire Department said, “Without the passerby and the quick action of the Goshen Police Department, things could have been a lot worse.”

Young's mother said she was at work, and didn't know the babysitter didn't make it to the house. She told ABC57 the police officer saved her son's life.

Destiny Hall said, “The attic door had fell down, and he couldn’t get through to go downstairs.”

All the kids were fine Sunday night but two firefighters weren't as lucky.

According to the Batallion Chief, two firefighters were taken to the hospital with injuries.

One was hit in the throat when a piece of metal fell from the roof, and the other fell through a window. They are okay and at home recovering Saturday night.

Firefighters said the cold was a huge obstacle.The windows of the home on 7th Street had icicles forming from all of the water used to fight the fire.

Chief Mcdowell said, “With cold temperatures it makes their job more difficult. We went to a second alarm right away to call in off duty personnel.”
Share this article: