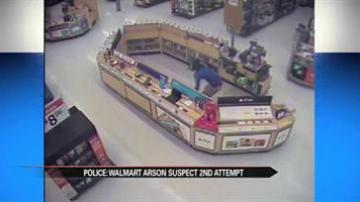 NILES, Mi. -- After leading police on a massive chase, the man police believe is the suspect in Sunday's arson and theft at a Niles Walmart, was found dead Tuesday night.  And now, investigators are saying Sunday was not the first time James Erik Turns may have attempted to rob that store.

Police say before Turns started the fire on Sunday, he broke a case and stole several electronics.  But investigators are now saying this wasn't his first attempt.

One woman was in the Niles Walmart on Saturday night, when she says Turns attempted to break that case, and failed.

"We heard some commotion when we were in the checkout lane...and a couple people went rushing back there," says Amanda Goble, who was shopping at the store Saturday night.

Police provided two surveillance videos...one, you can see the suspect wearing a black sweatshirt, and the second, where he is wearing a blue sweatshirt.