Police search for driver after van crashes into tree 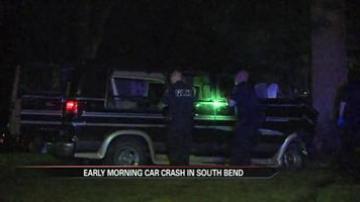 SOUTH BEND, Ind.-- Two men were taken to Memorial Hospital after an early morning accident. Police said a van crashed into a tree outside a home near the corner of Oak Ridge and Dorwood drives.

Police found two men a few hundred feet away from the crash site with minor injuries. Neither man said he was the driver of the van and both refused to tell police the identity of the driver.

Neighbors said they heard a loud crash, followed by an explosion, just after 4 a.m. Sunday.

Police said the two men appeared to be sober, but were uncooperative.