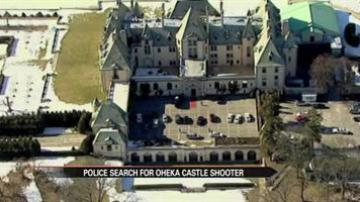 The owner of the Oheka Castle, 69-year-old Gary Melius, was getting into his car when police say a masked gunman ambushed him and fired at his head.

Melius survived that shot and is recovering from surgery for head trauma. Doctors said he was alert and talking.

"I am shocked. This is a lovely, quiet neighborhood. Gary Melius is the nicest person in the world, to the neighborhood, to everyone. I don't know who would ever want to hurt somebody so nice," said Mansion tour guide Deborah Brigman.

Investigators are checking surveillance video and visitor logs for the 127-room mansion hoping to find clues about the shooter and a motive.