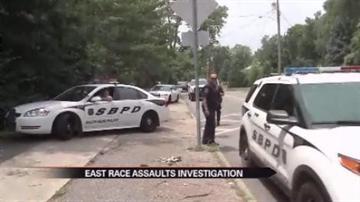 SOUTH BEND, Ind. -- South Bend’s East Race was swarming with police Thursday afternoon after a naked man grabbed two women out for a walk. Police say this is the fourth time in two weeks the man has been spotted.

"We got here around 11 and we walked clear all the way to St. Joseph High School,” said Sally.

Sally and her friend Mary decided to spend part of their Fourth of July holiday walking at the East Race.

"This is one of our favorite. We never have had any problems before,” said Sally.

"We were headed back and when we got by those steps over there that's where he jumped out,” said Sally.

They say a naked white man in his 30s lunged towards them and grabbed their backsides.

"You know he just jumped out and scared us because he had no clothes on. She and I both kind of yelled out and he grabbed at me and then I started screaming and took off running and he just kind of smirked,” said sally.

"He had something wrapped around his head and it was like a cloth and I think that was his shorts Because he had nothing in his hand and the next thing I know he's putting shorts on,” said Sally.

"We have been out here for about 45 minutes looking for the suspect,” said Lieutenant Joe Galea of the South Bend Police Department.

Galea says this is the fourth time in two weeks that this nude man has been spotted there jumping out at people.

"But this is the first report of him actually assaulting or touching a female,” said Galea.

All of the victims have reacted the same way.

"I took off running which you would naturally do. I was scared to death,” said Sally.

Police have increased patrols in the area. If the suspect is caught he could be charged with assault and indecency.