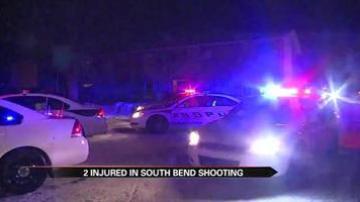 SOUTH BEND, Ind. -- South Bend Police are searching for two suspects who shot through the window of an apartment at Corby Homes, injuring two people.

The shooting happened around 6:30 p.m. Sunday.

Police say the victims were in their late twenties.

“I heard three, four gun shots one after one,” said a neighbor.

A neighbor who lives at Corby Homes was so scared after the shooting, she didn't want her identity revealed.

She said she heard the gunfire and she and her family ducked for cover.

“At least two parties came up, walked up to an apartment at 1098, shot through the window several times and struck two parties inside,” said Lieutenant David Newton of the South Bend Police Department.

The two victims were taken to Memorial Hospital.

“One was shot in the leg. One shot in the back,” said Newton. "The two suspects got away and police are on a manhunt trying to track them down.”

Cops only have a very vague description of the getaway vehicle.

“We have no license plate. We just know it was a dark colored vehicle,” said Newton.

The victims are not making it easy on police to catch the gunmen.

“Our victims are not really cooperating,” said Newton.