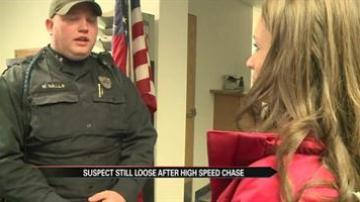 NORTH LIBERTY, Ind.-- Police are asking the public for help finding a man who led them on a high speed chase Tuesday morning.

The chase started in North Liberty and ended in Marshall County.

Officer Wesley Walls believes the man who led him on the pursuit is Aaron Egger.

“I had an informant tell me he was driving a blue vehicle he was coming down S.R. 23 and I noticed it. I looked inside, and noticed it was the suspect I was looking for,” Walls said.

Egger is wanted in Marshall and St. Joseph counties on several criminal charges.

“I went down Riley Road and then he took off on me. He went through a lot of stop signs and risked a lot of people’s lives,” Walls said.

Walls had to slow down during the pursuit because of the icy road conditions.

“Speeds were raging 70 to 80 miles-per-hour and just trying to catch him on icy and snow covered roads was dangerous, we try to go home at night,” Walls said.

The chase turned into a foot pursuit and then the suspect made it back to the vehicle and escaped.

“Marshall County intervened him and they came to a stop there. He proceeded to another officer, almost hurting another officer trying to run him over,” Walls said.

A woman was in the car at the time of the pursuit.

"She’s not injured, she’s actually home. We dropped her off back home but she’s really shaken up,” Walls said.

The list of charges against Egger has grown. He will now face charges of criminal recklessness and criminal confinement because of the woman in the car.