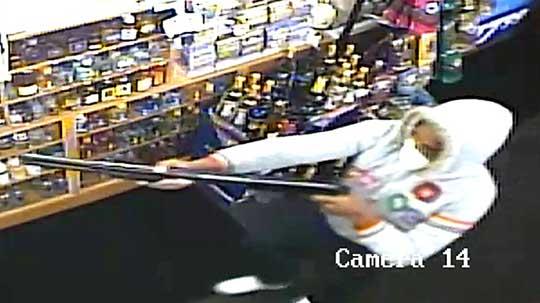 South Bend Police are attempting to identify a man who robbed the Liquor Barn on Mishawaka Avenue on November 11th.

"We had an individual walk into the liquor store in the 2400 block of Mishawaka Avenue. He held the place up with a very big shot gun," said Captain Phil Trent of the South Bend Police Department.

Police released a surveillance photo that shows a man wearing a hooded sweatshirt and mask over his face, carrying a shotgun.

The employee working that evening says he feared for his life and hopes the suspect will be arrested soon.

But police don't have much to work with.

"This person's done a fairly decent job of obscuring his face, so we can't get 100-percent ID of the face," said Trent.

The suspect was wearing a gray hooded sweatshirt with bright colored letters, is thin and between 5'2" and 5'6" tall.