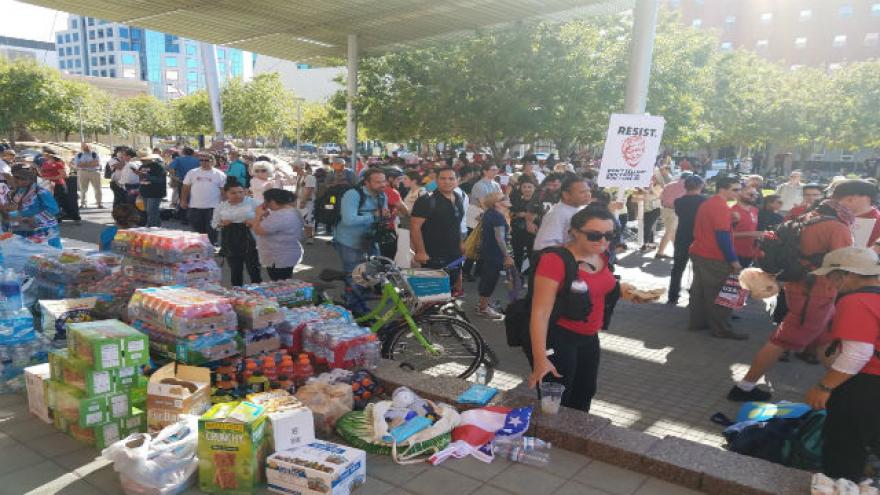 The protests come more than a week after demonstrations in Charlottesville, Virginia, where clashes between white supremacists and counter-protestors turned violent and resulted in one death. Trump drew widespread condemnation for his response to the Virginia clashes, in which he blamed "both sides" for the violence.

A police helicopter circled overhead crowds of protesters, telling them to leave the area. Other officers on the ground urged remaining protesters to disperse or be arrested for unlawful assembly.

"People in the crowd began fighting and throwing rocks and bottles at police," Sgt. Jonathan Howard, of the Phoenix Police Department, said in a statement to CNN. "They also dispersed some gas in the area. Police have responded with pepper balls and oc (pepper) spray in an attempt to disperse the crowd and stop the assaults."

As Trump supporters began trickling in to the convention center, protesters continued to descend upon downtown Phoenix carrying protest essentials -- signs, megaphones and water bottles to stay hydrated in the 100-plus degree weather.

Carol McGovern wore purple to honor the memory of Heather Heyer, who died while counterprotesting in Charlottesville. McGovern came with her daughter, her friend and her friend's daughter.

"We're here for her," McGovern, a Phoenix resident, told CNN. "I can't even imagine being Heather's mother and lost her the way she did when she was coming out just like we are today just trying to be a positive force. This is not a time to be silent ... you only send a message if we are in big numbers like this."

Meanwhile, hundreds of other protesters climbed the stairs of the parking lot across the street from the convention center to watch the crowds from higher up.

Joseph Dick, a 34-year-old Phoenix resident, was among those on the roof of the parking lot.

"I definitely expected it was going to be big," Dick, who also participated in the Women's March in Phoenix, said of the anti-Trump protesters. "Usually in Phoenix there's not a lot of movement toward activism but recently it's trending. I think people are really trying to turn the state blue...it's important to show up and represent."

While the streets around the convention center were packed as early as 3 p.m., much of the protesting remained peaceful. Early on, there were some tense back-and-forth moments between protest groups and Trump supporters. However, a handful of cops acted as a physical barrier.

On the convention center side of Monroe Street, Trump rally attendees were ushered into the venue in lines. On the other side of the street, anti-Trump protesters had put up an inflatable Trump -- in a white robe with a Nazi symbol -- as well as a giant sign that read "white supremacy will not be pardoned."

Anti-Trump protesters yelled chants including "Shame" and "No Trump, no KKK, no fascist USA."

"Trump saying people on both sides are to blame was the last straw," Eva Spivey, 25, of Avondale, Arizona, told CNN. "Racism is a one-sided thing."

Anna Ruiz, a teacher in the Phoenix Union High School District, said she marched for her undocumented students who were "too afraid."

"It makes me sad to have to be out here," she told CNN, while tearing up. "Everybody who lives in this country has rights."

"After the election I felt so bad, they look at an old guy like me and think I voted for him," Smith told CNN. "It's embarrassing. Everything about him repulses me, and the fact that people are still coming to support him after the racism that's so blatant. There's nothing in the new message but people are starting to get the message."

Some had simpler reasons for showing up.

"Somebody had to," Noni Nez, from Mesa, Arizona, told CNN.