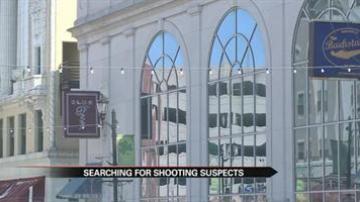 SOUTH BEND, Ind. -- South Bend Police are searching for the man they say opened fire in a parking garage downtown over the weekend. Around 3 a.m. Saturday police responded to a massive street fight and described the scene as chaotic.

One person was struck with a beer bottle in front of Club Fever and an officer witnessed two people get shot inside a parking garage.

"There's gunfire, but at the same time there is somebody assaulted with a bottle, there's other people just in hand to hand combat out there and it doesn't look like it is tied to one single event," said Captain Phil Trent of the South Bend Police Department.

The double shooting at the parking garage downtown was not the only instance of gun violence last week.

On February 25, Christopher White was shot and killed at a house party just minutes away from downtown.

On February 26, a man was paralyzed after a shooting on Johnson Street.

"Unfortunately we had one person deceased, but all these cases that happened early in the week were resolved. In both cases arrests were made," said Trent.

Police said they believe all three shootings are isolated.

"If somebody was going to buy a piece of property downtown unless they were worried about doing something at 3 o'clock in the morning, it's really not an area that we've seen particular problems," said Trent.

Police do not believe the fight at Club Fever was connected to gang violence.

If you have any information on the shooting, contact the South Bend Police Department.