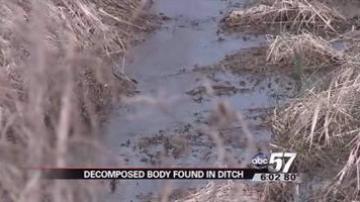 COVERT, Mich. - A badly decomposed body that’s turned up in a drainage ditch has police in Van Buren County scratching their heads.

Tuesday, a farmer working his fields came across the body just north of the intersection of 72nd Street and County Road 387 south of Covert.

Covert Township police are calling it a suspicious death but haven’t ruled foul play. The body was found so badly decomposed they suspect it’s been there since fall.

Police admittedly don’t have much to work with.

“No leads,” said Chief Rick Winans, with the Covert Township Police Department. “A couple calls we have to follow up on but nothing concrete right now.”

“We couldn’t tell if it was male or female or what race it was,” said Winans. He said the body has been in the ditch for so long there’s almost no evidence to investigate.

“People drive on 72nd,” said Dana Morris, a woman who lives nearby.  “That’s a main strip.” Morris said she doesn’t understand how a body could be in a ditch for months without anyone noticing.

An autopsy done Wednesday in Lansing showed the body was likely that of an African-American man. Police said it has a calligraphy tattoo on his arm spelling the word ‘GLEE’ and has a tongue ring.

Police say there’s no evidence of violence but will not know the exact cause of death until toxicology results are back.