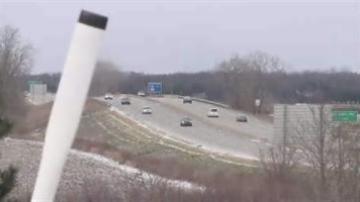 ST. JOSEPH COUNTY, Ind.-- Police are warning drivers to avoid the US31 bypass during the lake effect snow advisory. Saturday morning police were dealing with several slide-offs. The Indiana State Police said there is an increase in car accidents on the Indiana Toll Road during drifting winds and freezing temperatures. Trent Smith said, “No they are only going to continue to get worse at this point. The crews are out putting down some things to help melt the snow and keep the roads from freezing. As the sun sets today we will have heavy traffic because of the Notre Dame game, so we would suggest you stay away from the stadium.” Sergeant Trent Smith said drivers need to slow down, increase their distances between other cars, and break early. Sergeant Trent Smith said, “The last thing you really want to do is be driving too fast and slam on your breaks because that could cause some issues where you might slide off the roads or cause someone else to be involved in an accident.” He also said drivers should be cautious of black ice covered by snow. Sgt. Smith said, “When you’re coming up to an overpass, make sure you aren’t accelerating or passing anybody. Let off the gas a little bit... If you’re travelling on the toll road tonight, be aware that you could be in Elkhart and the suns out, but when you get to Laporte you could be in near white out conditions.”