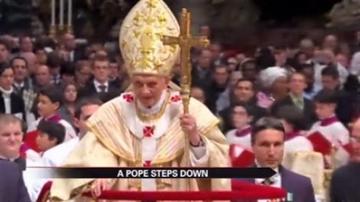 SOUTH BEND, Ind. -- For the first time in nearly 600 years, a pope has announced he is going to resign. We spoke with professors at Notre Dame and Saint Mary’s College about the Pope’s resignation and what happens next.

Pope Benedict XVI has 17 days left before he'll turn in his official resignation on February 28th.

"This is unchartered territory. We don't know. We assume it means he will not make any significant decisions,” said John McGreevy, Dean of Notre Dame College of Arts and Letters.

McGreevy says he woke up to the news, just like Joseph Incandela, St. Mary’s Associate Dean of Faculty.

"I think people are really surprised by it. They probably are more surprised by this than had he died. Frankly because we're used to popes leaving office in that way,” said Incandela.

Now the College of Cardinals must choose a new leader under unusual circumstances,

Protocol calls for the Cardinals to meet in Rome for a Conclave, which will all be held behind closed doors.

Pope Benedict XVI says he doesn't want to be part of the process.

Pope Benedict XVI was a native of Germany but his predecessor Pope John Paul II was actually from Poland and the first non-Italian pope in nearly 500 years.