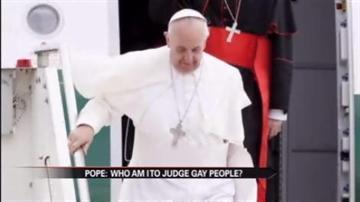 Pope Francis caused a stir in the Catholic Church saying ”who am I to judge" gay people.

The official stance of the Catholic Church has been, while homosexual desires are not sinful, the physical acts are.

The Pope's predecessor, Pope Benedict the 16th, was far more conservative and caused controversy with statements about the gay community.

Reaction in the Catholic community Monday was mixed.

The pontiff also said not enough has been done to include women in the church and that their role needs to be more prominent and important. It is all part of his plan to reverse what he calls an exodus of believers from the church.