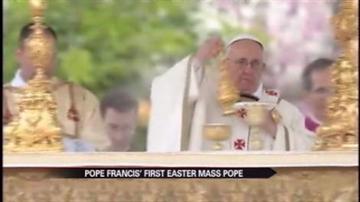 The crowd was filled with people from around the world.

The pope started the day with a tweet, which excited the faithful.

Some came to watch the mass all the way from Las Vegas.

"I never imagined that I would be here on Easter Sunday with a new pope. I mean it's something unfathomable and I'm so happy to be a part of it," said Dee Marie Constable, who traveled to Vatican City from Las Vegas.

The pope ended the celebration by continuing his style of breaking with tradition.

He joined the crowd waving and kissing babies.