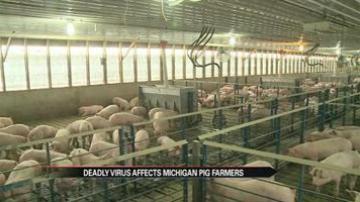 JONES, Mich. -- Several farms in Michiana have reported outbreaks of the Porcine Epidemic Diarrhea Virus. The virus can be deadly to pigs, especially non-weaned piglets.

The virus was first found in England in the 1970s and was found in the United States in 2013.

Rolling Meadows Farm is one of the 93 farms in Michigan that been affected by this virus.

"I mean the prices have come up because of the shortage of pigs. Most of the pigs have been lost between December and March," said White.

White is being proactive to preserve his pig population.

"Another way that producers are trying to offset that loss is to raise their pigs to a heavier weight so you can still produce the pounds with the lower number of pigs," said White.

Researchers have yet to find a cure for the virus.

"It's in our nature as a hog farmer to care for that animal and I mean it's devastating to the business, to us emotionally, to the people that work in the barn," said White.

White is hoping for a vaccine.

"I hope that as an industry we will be able to come up with a vaccine for a virus," said White.