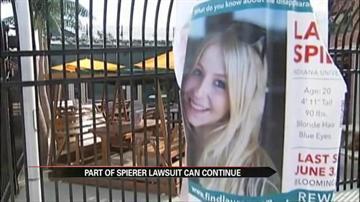 INDIANA — A judge ruled a portion of the wrongful death lawsuit for a missing Indiana University student can move forward.

Lauren Spierer disappeared after a night of drinking in 2011.

Her parents later sued three people she was with that night for not ensuring that their daughter made it home safely.

A judge dismissed one of their complaints because Spierer was an adult when she disappeared.

Earlier this month, one of the defendants was dismissed from the lawsuit.