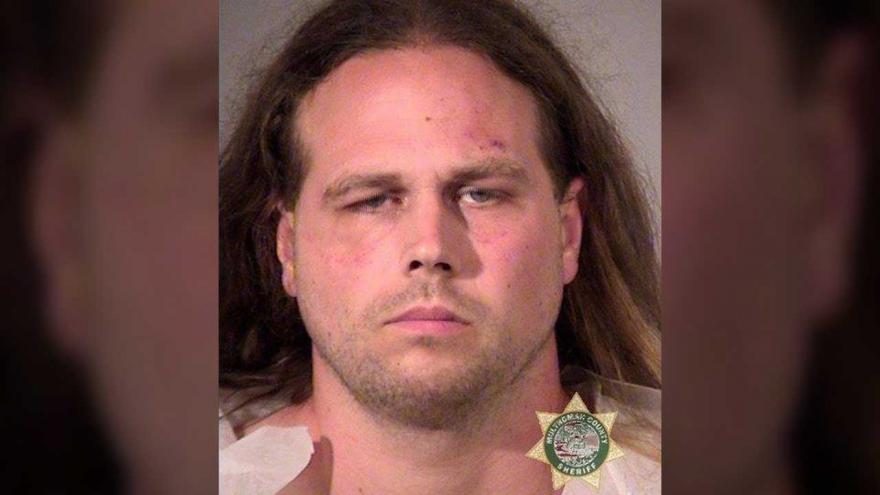 (CNN) -- Jeremy Joseph Christian began yelling when he walked into the courtroom Tuesday.

"Get out if you don't like free speech," he said, and, "You call it terrorism, I call it patriotism. You hear me? Die."

Christian, 35, is accused of fatally stabbing two men who defended a 16-year-old and her Muslim friend on a Portland, Oregon, train last Friday. He was yelling racial and religious epithets that day, police documents say.

Two deputies flanked Christian -- listed in court documents as being at least 6 feet tall and weighing 250 pounds -- during the brief court hearing. He wore a blue jail jumpsuit and didn't say anything other than to yell slogans.

Watching from the front row was Micah Fletcher, a stabbing victim who survived. He recently got out of the hospital.

Christian was arraigned on several charges, including two counts of aggravated murder, attempted murder, two counts of second-degree intimidation and being a felon in possession of a restricted weapon, police say.

His next court appearance will be June 7. A Multnomah County grand jury will convene in the coming days to consider additional charges and federal authorities are still deciding whether to prosecute Christian for hate crimes.

Christian: 'I can die in prison a happy man'

-- Train security cameras showed Christian taking "large drinks from a bladder style container of purple liquid" that Christian later identified as Sangria wine, according to a deputy district attorney's affidavit of probable cause to support the continued detention of the defendant.

-- When police cornered Christian after the stabbings, he threw a folding knife with a 3.75-inch blade that bounced off a police vehicle, the affidavit said.

-- A video camera inside a patrol car captured Christian saying, "I just stabbed a bunch of (expletive) in their neck. ... I can die in prison a happy man," the affidavit said. He said one of the men on the train kept resisting him, despite his threats. "That's what liberalism gets you," Christian said.

-- Christian said he was transient and "does not know the last time he had a permanent address." Court documents from previous years show he lived with his parents. Christian said he dropped out of high school, but passed the high school equivalency exam known as the GED.

-- He was sentenced to 90 months in prison for the 2002 armed robbery of a Portland convenience store. While fleeing, Christian was shot in the head by an officer who said he thought Christian was going to shoot him. Christian said he robbed the market because " the guy there doesn't sell any winning lottery tickets," the arresting officer said, according to a prosecutor's affidavit.

'We should just kill ourselves'

Destinee Mangum, 16, told CNN affiliate KPTV that she and her friend, who was wearing a hijab, were on the MAX light-rail train Friday when Christian confronted them with several hateful remarks.

"He told us to go back to Saudi Arabia and he told us we shouldn't be here, to get out of his country," Mangum told KPTV. "He was just telling us that we basically weren't anything and that we should just kill ourselves."

Mangum and her friend moved to the back of the train. A stranger intervened, telling Christian he couldn't disrespect the girls in such a way, she said. Christian began arguing with several men.

Train security video and passengers' cell phone video showed Christian "making a sudden move" toward Taliesin Myrddin Namkai-Meche, 23, of Portland, who responded by standing, according to the deputy prosecutor's affidavit. Christian was standing very close to Namkai-Meche when Fletcher stood up, too, the affidavit said.

Fletcher, clutching his neck wound, exited the train and got help from passengers on the platform, the affidavit said.

Christian grabbed his belongings, exited the train and used the knife to threaten several people on the platform, the affidavit said. He also grabbed the bag dropped by the Muslim woman and tossed it onto the freeway. He was arrested a short distance away.

Namkai-Meche and Best died of multiple stab wounds, the affidavit said. Fletcher said in an interview with CNN affiliate KPTV that his injuries missed being fatal by 1 millimeter.

Fletcher, 21, told local media that he intervened during the incident on Friday because "it was the right thing to do."

But he choked up when he spoke about the two men who died, Namkai-Meche and Best.

"I want the families of those two men that their children are heroes. They will always be loved in the eyes of this city," he said.

Fletcher also said Portlanders had to protect each other.

"If you live here, move here, or if you want to call this city home, it is your home," he told ABC News. "And we must protect each other like that is the truth, no matter what the consequences."

"The Muslim community, especially in Portland, needs to understand that there are a lot of us that are not going to stand by and let anybody -- whether they are from here or not -- scare you into thinking you can't be a part of this town, this city, this community, or this country, he said.

Another incident the day before?

Video obtained by CNN affiliate KOIN shows that Christian was involved in similar behavior on a MAX train only one day before.

Recorded by a woman who asked to be identified only as KK, the video shows Christian on a train late Thursday, aiming pejoratives at a conductor.

"It looks like we have a Christian or Muslim (expletive) bus driver. I'll stab you, too, (expletive)," he said.

KK told KOIN he was upset, complaining about the city and "venting to his friend on the phone about some girl that just pepper-sprayed him." He was complaining about Muslims, Christians and Jews -- saying they should burn at the stake and "f**ing die" -- something she'd never heard before on Portland's MAX trains, she told the station.

Police spokesman Pete Simpson confirmed that the man in the KOIN video is Christian. Simpson also said that Christian was maced the day before the deadly attack. The incident is part of a larger investigation and he didn't have further details, he told CNN.

Police are examining Christian's background, "including the information publicly available about the suspect's extremist ideology," they said in a news release. Videos have surfaced showing Christian shouting at people, at one point saying the N-word, as police officers separated him.

The aggravated murder charges carry a maximum penalty of death. Oregon has not executed a prisoner in more than two decades.

Christian also has a 2011 conviction on federal charges of felon in possession of a firearm, court documents show. The sentence on that charge was not immediately available.

In September 2002 he was charged with unlawful use of a weapon for having a sap -- a pink sock with two hard balls -- while in the Multnomah County Detention Center and sentenced to 13 months imprisonment, documents said.