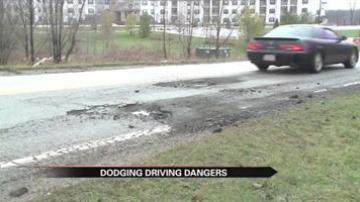 GRANGER, Ind. – The roads are cleared of snow and slush, but drivers are coming across even more problems.

“I was just driving down the road and I hit a pothole and it sounded like I broke my whole wheel,” says Barry Emmans from Granger.

Cleveland Road in Granger is not the smoothest road around.

Emmans had to pull over to make sure he is nothing broke on his car.

“I’m just worried about my rim and then having to buy a whole new one and my tire getting flat,” says Emmans.

As the weather changes, potholes are showing up more and more.

“I drove down it a couple days ago and it wasn’t that bad,” says Emmans.

But with the recent rain, it caused more erosion to the holes.

“With yesterday’s rain, it got pretty worse just driving through it I think personally,” says Nick Tammarath of Granger.

While some drivers go straight over them, others are driving on the other side of the road to avoid hitting them.

Many of the potholes on Cleveland Road are deep, one spot even measuring four inches.

Nick Eaton, a mechanic at Drive & Shine in Mishawaka says customers are coming in more than usual to check their tires.

“We had a guy come in today that hit a pothole and his whole tire came off his rim because he had no pressure in his tires,” says Eaton. “The best advice I can give you is just make sure the tire pressure is always on point and just avoid the potholes the best you can.”
Share this article: