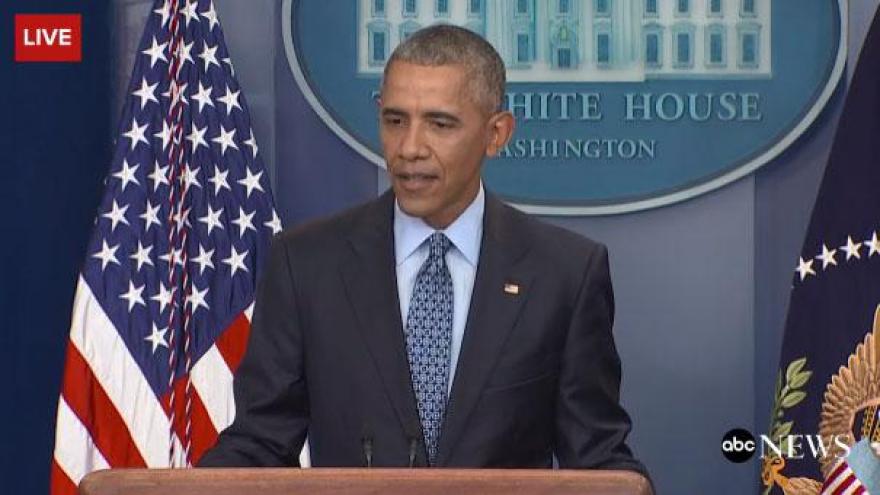 WASHINGTON (CNN) -- President Barack Obama conceded Wednesday that President-elect Donald Trump may not take his advice on issues as he "won an election opposed to a number of my initiatives."

Obama added that once Trump gets into office and is hit with the "complexities" of issues, his thinking might shift on issues such as Obamacare and jobs.

In a news conference that will likely mark the final time Obama speaks in public before he departs the US Capitol on Friday as an ex-president, Obama described the phone calls between him and Trump as "constructive" and at times "lengthy."

Obama said the greatest advice he could give -- and has given -- to Trump, is to rely on others around him.

"This is a job of such magnitude that you can't do it by yourself," Obama said.

Obama opened the news conference rebuffing Trump by issuing a vocal defense of the White House press corps, insisting the reporters who covered his administration were an essential facet of a functioning democracy.

His remarks stood in direct contrast to the incoming president, who has lambasted news organizations reporting on his transition as reporting "fake news." His choice to appear in the White House briefing room was also telling since Trump's team has floated the possibility of scrapping that venue for larger space.

Obama was continuing a tradition of taking reporters' questions for a final time before departing office. George W. Bush held his final news conference a week before leaving office, reflecting on some of the disappointments of his administration but also defending the controversial decisions he made over two terms in the White House.

Unlike Bush, Obama is leaving office with near-record approval ratings. A CNN/ORC poll released Wednesday showed 60% of Americans approve of the job he's doing as president.

Obama's concluding news conference comes amid a flurry of last-minute activity, including handing down a commutation for national security leaker Chelsea Manning and a pardon for Gen. James Cartwright, convicted of lying to investigators in a leak probe.

Obama defended the decision to commute Manning's sentence, saying that she served a "tough prison sentence." He said he looked at the particulars of the case the same way he had any other person whose sentence he had commuted.

"I felt that in light of all the circumstances, that commuting her sentence was entirely appropriate," Obama said from the briefing room.

He said the time she's already spent in jail would function as a deterrent for any future leakers while warning other potential whistleblowers to use established government channels to air grievances about the actions of the US government. But he said that "justice has been served" for Manning, a transgender woman who has been serving time at an all-male military prison in Kansas.

"The sentence that she received was very disproportionate relative to what other leakers had received," Obama said. "It made sense to commute and not pardon her sentence."

The decision has been lambasted by Republicans, who have accused Manning of being a traitor for disclosing hundreds of thousands of pages related to classified US programs.

Ties between the incoming and outgoing administrations have strained over Trump's relationship with Russia, which the US accuses of meddling in November's election. Trump has proposed friendlier ties to Moscow, which he said would lead to greater partnership on a series of sticky global issues from Syria to Ukraine.

Obama offered a cautious note on developing friendlier ties to Moscow, saying a constructive US-Russia relationship is "in America's interest and the world's interest."

But he said fostering warmer ties during his presidency was stymied by Russian President Vladimir Putin's combative stance when he returned to power in 2012.