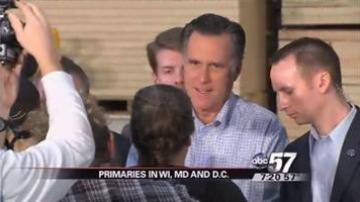 It is Primary night once again, and Mitt Romney is looking to be the favorite.

Tuesday voters are heading to polls in Wisconsin, Maryland, and D.C.

If Romney wins all three primaries, he will pick up 98 delegates, helping to build his lead.

In Wisconsin, Romney and his allies outspent Rick Santorum four to one.

With the race looking all but wrapped up, Romney's rivals are not ready to concede.

Santorum said, "The longer we're in this thing the stronger we're getting."

The Obama Campaign isn't waiting around for The Republicans to wrap up their race.

They have come out with a new ad that goes after the likely opponent by name.