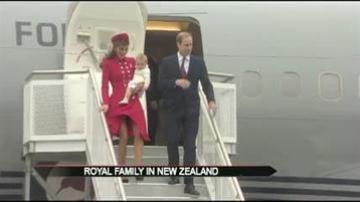 WELLINGTON, New Zealand -- He can't walk, but Prince George took his first steps into his royal duties this week. He is accompanying his parents, the Duke and Duchess of Cambridge, on his first overseas tour to two nations he could one day rule as king.

When the couple landed in Sydney they were escorted by the royal New Zealand Air Force for a three hour flight to Wellington, New Zealand.

Many well wishers were on hand as the royal family made their way through the country.

The duchess has never been to New Zealand or Australia. The palace says she wants to meet as many people as possible during her visit.