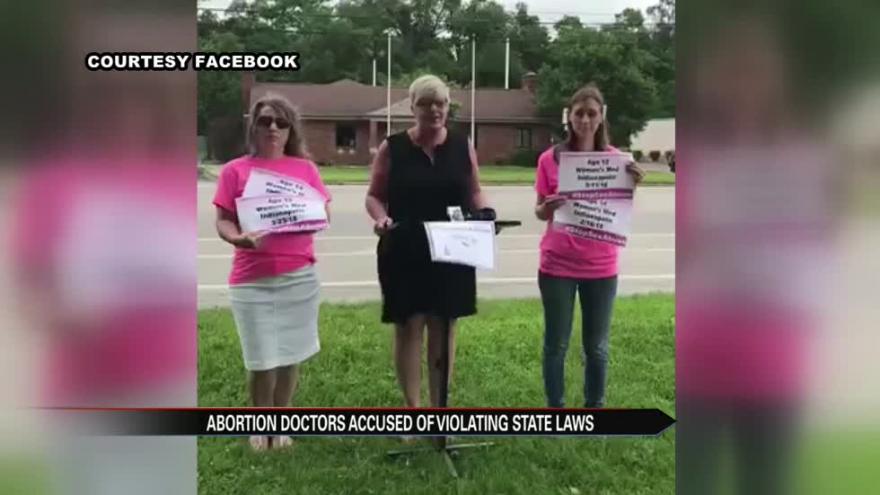 “This just allows authorities to properly investigate whether or not the health and safety of these young girls is being affirmed,” said Antonio Marchi, Program Director for the St. Joseph County Right to Life.

Indiana Right to Life groups are calling on the Attorney General and other state officials to crack down on abortion providers. They held a news conference across the street from a proposed abortion clinic on Lincoln Way West in South Bend.

Since July of 2017, Indiana abortion providers are required by law to report abortions performed on girls under the age of 16 to the State Health Department and Department of Child Services within three days of the procedures so any suspected sex abuse can be investigated.

“Mothers across the state of Indiana filed [48] complaints. The complaints filed on doctors throughout Indiana are all of great concern when it comes to the health and safety of these 12, 13, 14, 15-year-old girls,” said Marchi. “[It’s] really just to protect their health and safety. The odds of a young girl that age getting pregnant through consensual sexual activity are not super high.”

Among the nine doctors to allegedly have 48 complaints filed against them is Jeffrey Glazer, the Medical Director for the proposed Whole Woman’s Health abortion clinic that wants to move into the building on Lincoln Way West. Glazer was allegedly hit with 11 of those complaints for not properly reporting paperwork.

In one case involving a 12-year-old girl, pro-life advocates highlighted the required documents were not sent to DCS however it shows the State Department of Health did receive that information the same day.

“Really doesn’t prove anything accept he filed it on the same day as the procedure. It doesn’t tell me that he didn’t file the second report within three days,” said Amy Hagstrom Miller, President of Whole Woman’s Health Alliance.

And the whole woman’s health president says the pro-life group is undermining the important services they provide.

“I was really surprised in today’s press conference that Indiana anti-abortion groups openly admitted to requesting documents about every single abortion provided in the state as if that’s they’re normal practice. You really seem to harass and intimidate providers,” said  Miller. “Very irresponsible rhetoric, the language they’re using is very inflammatory. These are highly trained medical professionals who have dedicated their lives to women’s health care.”

The proposed clinic is still in the appeal process to try and get its license to open after it was initially denied back in January. The pro-life Women’s Care Center is buying a building across the street and previously stated it would not stage protests in that area. Right to Life says the Center was not involved in Wednesday's news conference and that event was not held on property that the Center would own.

“On Wednesday evening, ABC 57 erroneously reported an event put on by Right to Life was held on the property of the old Catnap Inn on Lincoln Way West in South Bend. That property is being purchased by the Women’s Care Center. The event was not held on that property and the Women’s Care Center was not involved in any way with Right to Life’s press conference concerning Indiana abortion doctors accused of not properly reporting to the state. We corrected the online version of this story Thursday after speaking with Right to Life officials.”