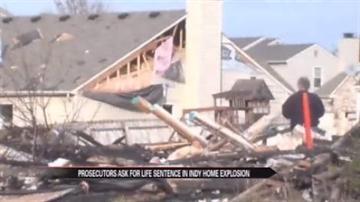 INDIANAPOLIS -- Prosecutors are asking for life sentences for the three people accused in the deadly home explosion in Indianapolis in November 2012, if they are convicted.

The deadly Indianapolis home explosion happened back in November and killed two neighbors.

Prosecutors say the trio plotted to fill their home with gas, ignited it with a microwave timer and killed their neighbors.

They leveled five homes and caused more than $4 million in damage.

"That the families understand that it is very, very difficult to get finality and certainty in a capital case. These cases can drag on, like I said, for as long as 15 years," said Terry Curry, Prosecutor.

Prosecutors say the death penalty was under consideration. The three suspects will appear in court on February 21st.