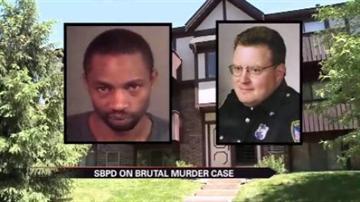 ST. JOSEPH COUNTY, Ind. – The officer who shot and killed Edward Mwaura while he was allegedly stabbing his 6-year-old daughter, was justified in the use of deadly force, according to the St. Joseph County Prosecuting Attorney.

According to the office’s investigation, when police arrived, they located Lucy Mundia outside the apartment with stab wounds to her hands, cheek and chest.

She said her ex-husband stabbed her and that he was still in the apartment with their 6-year-old daughter, reports said.

The officers, including Lieutenant Steven Noonan of the South Bend Police Department, approached the apartment and called out for the suspect to come out. He didn’t come out and officers began to hear screaming.

They forced their way inside the apartment.

Another officer grabbed Shirley and carried her to the ambulance outside. She died from her injuries.

Shirley’s cause of death was multiple sharp force injuries.

Mwaura’s cause of death was two gunshot wounds. He also received a stab wound to the torso, which was not his immediate cause of death, but officers and the pathologist cannot explain how he received the injury.

After a thorough investigation, the prosecutor’s office determined Noonan and the other officers acted appropriately when they entered the locked apartment.

In addition, the prosecutor’s office stated Noonan was justified in using deadly force when he shot Edward Mwaura because he was actively stabbing another person.

The prosecutor’s office wrote, “Indiana Code 35-41-3-2 provides that a person may use deadly force to protect a third party to prevent serious bodily injury or to protect that third person from a forcible felony.”

As a police officer, the decision to shoot someone is never an easy one.

"You want to be right for all the right reasons,” said Captain Phil Trent, South Bend Police Department.

The psychological ramifications can be tough.

"There can be a heavy burden upon them, especially when the police action shooting also happens to, in this case, involve the death of a child,” said Trent.

That's why counseling is available to all of the officers who were present during the officer involved shooting.

"That was not present for the longest time. It is in place now to assist officers who might be going though some mental health issues, just based on the fact of what they had to do or see,” said Trent.

Anytime an officer is involved in a "critical incident" they are asked to speak to a private professional and are offered the chance to speak with fellow officers who have been through the same thing.

The amount of time they are off of work varies on a case by case basis, depending on the circumstances involved.