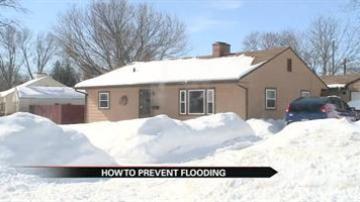 SOUTH BEND, Ind. -- Temperatures are predicted to stay in the 40s this week. With the frozen ground, all of that melting snow has to go somewhere. Experts say there are a few things you can do inside and outside your home to prevent water damage.

"We've piled up a lot of snow around doorways or entryways into our homes and that pile begins to melt coming up to the top of the threshold of your door would be an access point that it might try to migrate to," said Al Scott, President of First Response.

Five months ago, the neighborhood near Chippewa Street dealt with severe flooding after heavy rains.

Now, homeowners are worried they could have the same issue again.

"We had three feet of water up to our hips and we even had some neighbors out there kayaking out there in the water," said South Bend resident Diane Thompson.

"Protect your home, protect your valuables so they don't get damaged, sandbags and do whatever you can to maintain it," said Thompson.

In order to do that, Scott says you should clear the area around your drain pipes to let the water flow.

There are things you can do inside, too.

"You might want to look around and make sure you have things locked up a little bit. Cardboard boxes sitting on the floor is normally not a good situation," said Scott.

"It should be interesting in the winter time. We're not used to the winter and flooding," said Thompson.