Protesters invade US Embassy in Yemem 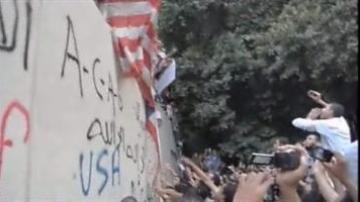 YEMEN -- Protesters have stormed the U.S. Embassy in Yemen.

The numbers are growing and at least 1,000 rioters are on the grounds and chanting, "Death to America,” setting tires on fire, many scaling the main gate. Witnesses said the massive group is trying to break windows and earlier ripped off the U.S. Embassy sign on the wall.

Government officials have said they have things under control and they are not supporting the protesters and they’re similar to an attack on the U.S. Embassy in Cairo, Egypt Tuesday.

Local media is calling the protesters hard core, with tear gas, flags burning and a lot of outrage against the U.S.

Egypt's president has now condemned the attack in Libya and said it will control the situation in Cairo and won't allow the violence at the U.S. Embassy.

In Libya, a Navy destroyer is now on the coast, a second warship on the way. The U.S. is beefing up security, dozens of Marines on guard and a manhunt underway for the group behind the deadly attack that killed four Americans, including the U.S. ambassador to Libya.

Thursday the U.S. is investigating whether or not the attack there was preplanned. Officials now believe it was coordinated with the anniversary of 9-11. Originally it was thought to have been tied to that anti-Muslim movie, the homemade You tube video that sparked the protests in Egypt and what's going on in Yemen.