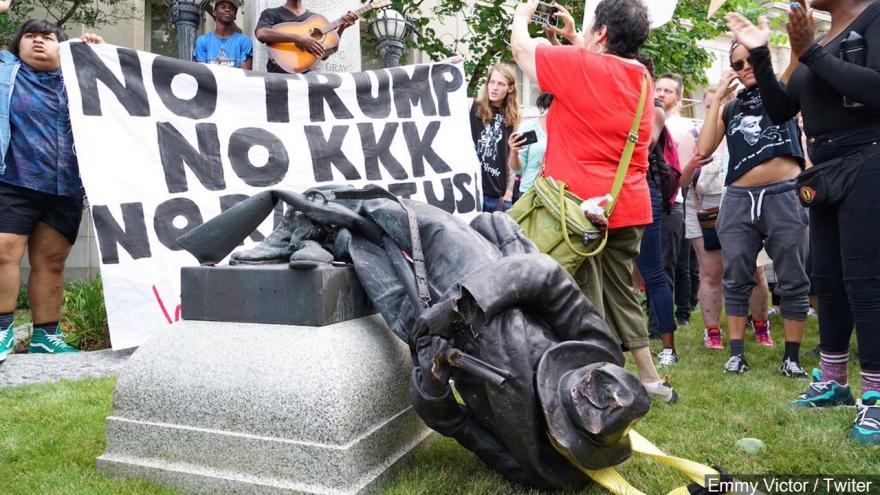 (CNN) -- A protest in Durham, North Carolina, organized to stand in solidarity with anti-racist activists in Charlottesville, Virginia, took a turn Monday when participants toppled a Confederate statue.

Demonstrators gathered at the old Durham County courthouse around the Confederate Soldiers Monument. The monument, dedicated in 1924, depicts a soldier holding a gun on top of a concrete pillar. The pillar is engraved "In memory of the boys who wore gray."

A person climbed a ladder and tied a rope to the top of the statue as the crowd chanted, "We are the revolution."

Protesters pulled the rope and erupted in cheers as the statue toppled onto the ground. Several people ran up to the mangled statue, kicking it and spitting on it.

"The racism and deadly violence in Charlottesville is unacceptable, but there is a better way to remove these monuments," tweeted Gov. Roy Cooper.

From New York to Indiana to California, numerous demonstrations have been organized since Saturday, when Heather Heyer was killed in Charlottesville while counterprotesting a white nationalist rally. Many demonstrators connected with each other through public Facebook events calling for supporters.

At the end of the event description it reads: "Tear down all white supremacist Confederate statues now!"

Durham police said no arrests were made because the incident occurred on county property. CNN has reached out to county officials for a statement.

On Monday in Gainesville, Florida, construction workers, approved by the county, removed a Confederate statue called "Old Joe." The statue sat outside the Alachua County Administration Building for over 100 years.

The statue, unveiled in 1909, depicts a soldier known as "Old Joe" standing with his gun in his hands.

For the past two years, Alachua County has been in the process of removing "Old Joe" and figuring out a place to relocated it.

"Back in May 2017, Alachua County Board of Commissioners made the decision, to remove the statue stating that they didn't think the current location in front of the Alachua County Administrative building wasn't an appropriate place for the statue since it's a busy public area," Mark Sexton, a county spokesperson, told CNN.

Finding an organization to take the monument held up the process of removal. Two organizations turned down the board's offer of receiving "Old Joe" before the United Daughters of the Confederacy agreed to relocate it.