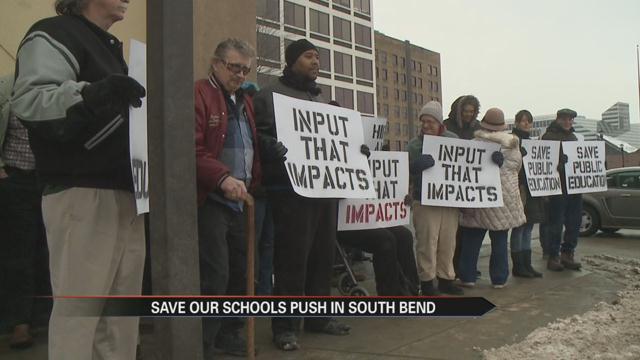 Calls for transparency were loud and clear as the search for South Bend Community School Corporation’s next superintendent continues.

Several dozen protesters rallied outside the school corporation building ahead of the scheduled board meeting.

The district is answering those calls by holding several focus groups in the community.

These calls for transparency happened Tuesday as there were two public forums tonight with representatives from the superintendent search firm.

While quite a few people showed up to the rally and board meeting, not too many showed up here for this meeting that was calling for their participation.

“We want the entire community, parents, students, to be actively involved in this choice for superintendent,” said Oletha Jones, member of Community Action for Education.

Input that impacts was a simple request by dozen or so protesters.

They want to have a voice in the conversation about the district’s next leader.

“We feel that this corporation has not done a very good job in keeping the community informed as to what is really taking place in our schools,” said Jones.

A feeling that echoed the walls of the school corporation and traveled inside hours later during the school board meeting.

“The person that takes the helm is going to be pivotal to addressing the long-term existing problems,” said Jones.

Problems this school board aims to address with help from the public.

“We certainly invite community through the surveys or focus groups or there were two community sessions held tonight too, one at John Adams High School and one at Washington High School, so we can solicit that additional information,” said school board president Jay Caponigro.

The participation though at the public forum held Adams was small according to a rep from the search firm.

“While the numbers have not been large, we’ve learned a great deal and we’ll take that information,” said David Smith, a representative H.Y.A Associates.

And the board will still hold more sessions with stakeholders because finding the next leader is top priority to the entire community.

“It’s not just about finding a very good superintendent, it’s about finding somebody who fits well with the community,” said Smith.