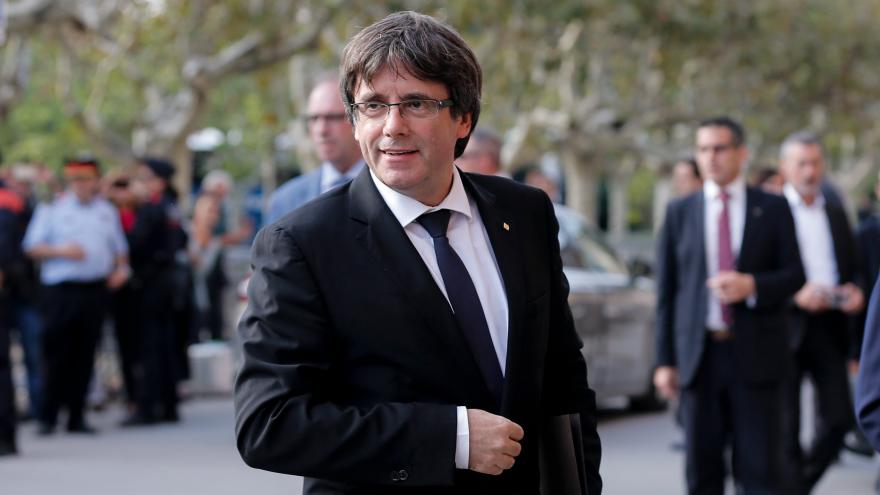 (CNN) -- Protests broke out in Barcelona on Sunday after the news that Catalonia's former separatist leader Carles Puigdemont was detained in Germany.

The ex-president of Spain's northern Catalonia region is being held at a police station in Germany, according to a tweet from his lawyer, Jaume Alonso-Cuevillas. Puigdemont was en route to Belgium from Finland and was detained after crossing the border from Denmark.

German police said in a statement that Puigdemont was arrested in the northernmost state of Schleswig-Holstein.

Puigdemont has lived in self-imposed exile in Belgium since October, after spearheading Catalonia's referendum on whether to secede from Spain.

The independence drive plunged the country into its worst political crisis in decades, with Madrid denouncing the referendum as illegal and calling for Puigdemont's arrest.

Spanish authorities accuse Puigdemont of rebellion, sedition and misuse of funds over his role in the referendum, in which 90% of voters were in favor of a split from Madrid. However voter turnout was low -- around 42% -- and Catalan authorities blamed the figure on the election day crackdown initiated by the national government.

Thousands of pro-independence protesters were participating in a massive demonstration in the center of the Spanish city, carrying Catalonian flags and banners with slogans emblazoned across them, state media outlet RTVE reported on its website. Crowds were heading for the office of the European Commission on Sunday evening.

Footage posted on social media shows crowds meeting with police wearing helmets, but the protests appeared to be peaceful.

A spokesman for the Catalonian police said one protester was arrested after launching an object against police.

A spokesman for the regional police force, the Mossos d'Esquadra, later said four people were arrested during the demonstrations, and the Catalan Emergency Services said about 50 people received medical attention for mild injuries.

Since fleeing to Belgium, Puigdemont has fought a war of words with Madrid from afar. But Madrid, which has maintained it has the law on its side, has waited out the crisis, refusing to allow Puigdemont to rule from abroad.

If Puigdemont returns to Spain, he will no doubt be arrested, making his return to the presidency problematic.

Other members of his political entourage have been jailed in Madrid, and are now awaiting trial over their roles in the independence push.

Madrid imposed direct rule on Catalonia after the independence declaration, stripping the autonomous region of many of its administrative powers.

It has shown no sign that it plans to withdraw from Catalonia, though it will likely do so if a candidate it regards as legitimate is anointed president.

Madrid called a snap election for December last year in hope of having a more moderate Catalan government to deal with, but its plan backfired when the region voted a majority of pro-independence MPs into parliament, maintaining the status quo.

The region has been without an official leader since Puigdemont fled to Belgium.