Protests kick off for second day ahead of G20 summit 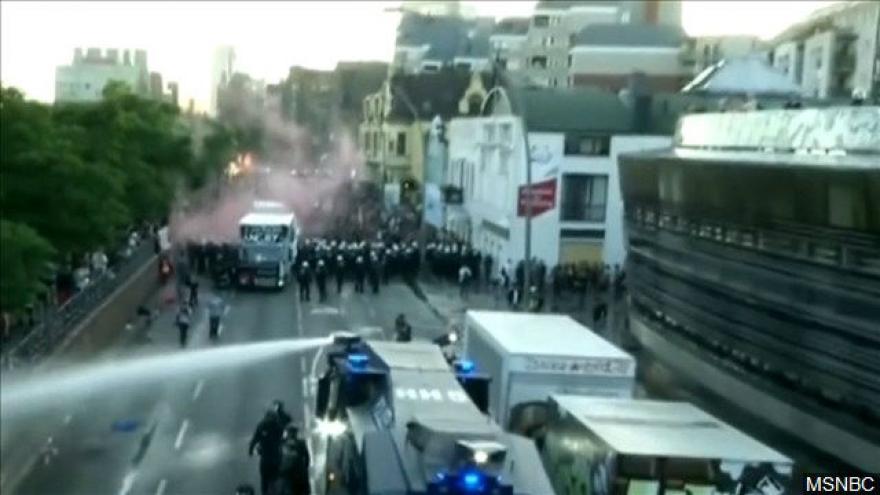 By Kara Fox and Joshua Berlinger

HAMBURG, Germany (CNN) -- German police are attempting to prevent small groups of protesters from disrupting the G20 summit in Hamburg, hours before world leaders are set to meet.

Officers dressed in riot gear intervened as protest groups tried to enter the red zone, the blocked-off area close to the summit venue, as other groups of people staged sit-ins across the city.

Water cannon was deployed against protesters, who had come armed with umbrellas and rain gear, at one of the sit-ins.

Members of the "Color The Red Zone" protest said they were trying to make it difficult for G20 participants to travel to the talks.

"We are living in a democracy and the red zone is not a democracy," said Karl S, a student protester from Düsseldorf who declined to give his full name.

"I'm sure we can't stop all these leaders from meeting but if we can stop them from getting their food or catering shortly we've achieved something," he said.

Christian, one of the protests organizers who also declined to give his surname, said the "point is to disturb the G20."

"It's not right that a few countries get to decide what happens to the rest of the world at this summit," he said.

Nearby, video from the scene shows police dressed in riot gear aggressively pushing a group of protesters and journalists away from the scene.

"This is what democracy looks like," protesters shouted amid the chaos.

Protests in other parts of the city appeared to be getting violent as well.

Smoke could be seen across the skyline from fires said to have been lit by protesters.

Police have asked the public to avoid the area near the Hamburg-Altona Railway Station, where authorities said people had set vehicles aflame and thrown Molotov cocktails.

The latest round of demonstrations, though unruly, are smaller and more dispersed than Thursday night's violence, during which dozens of police officers were hurt and water cannons deployed.

During Friday morning's protests, small groups of people were pushed back as they tried to march down streets to be used by G20 delegates.

Volunteers could be seen treating people with saline solution, possibly due to tear gas or pepper spray, and tending to other wounded.

One woman could be seen bleeding from her neck.

Police told demonstrators they were in an area that was forbidden.

Security is tight in the city of 1.8 million, as leaders from around the world convene for the G20 meeting.

The Group of 20, which includes 19 countries and the European Union, accounts for approximately 80% of global GDP. Around two-thirds of the world's population live in a G20 country.

During the two-day meeting in German Chancellor Angela Merkel's birthplace, leaders are expected to discuss climate change, terrorism and migration.

Many of the demonstrators who gathered Thursday were protesting against capitalism, but some joined to voice their concern about issues including global warming.

Thursday's protests were marked by violence -- police used water cannons as people threw bottles and smoke bombs during the "Welcome to Hell" march, which began about two miles from where the summit will be held. They were dispersed by midnight, according to police.

At least 76 officers were hurt, including one seriously, Hamburg police said. Authorities did not give the number of injured protesters and bystanders, but said one person had been arrested for throwing a bottle.

CNN's James Masters and Atika Shubert contributed to this report