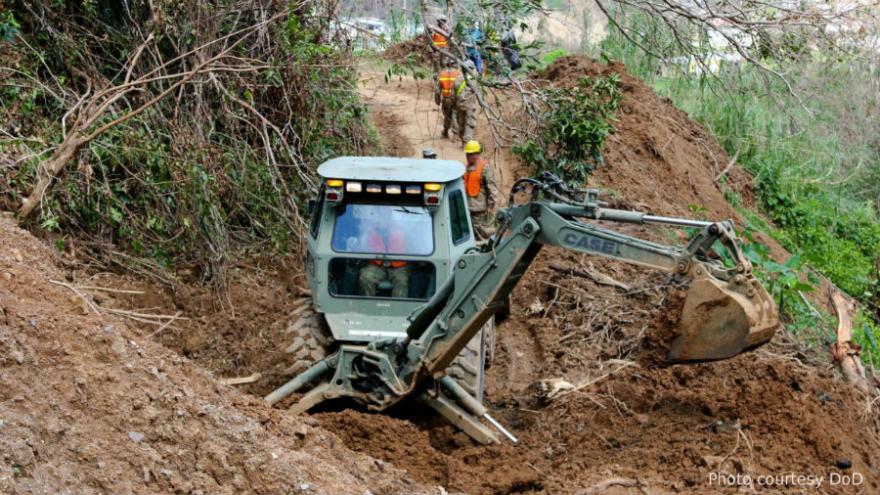 In announcing the resignation of Abner Gómez, effective Saturday, Gov. Ricardo Rosselló praised the work of his emergency management chief following the passage of Hurricanes Irma and Maria in early and later September.

The governor also announced that Lt. Gen. Jeffrey Buchanan, who was appointed by the Pentagon to lead all military relief efforts, will be reassigned outside the island next week.

About 60% of the US territory is still without power as the island's approximately 3.4 million US citizens struggle through the aftermath of the storm.

A massive power outage struck the capital of San Juan on Thursday after a major north-south transmission line failed, according to the Puerto Rico Electric Power Authority, known as PREPA.

Rosselló did not give a reason for Gómez's resignation.

The emergency management director came under fire after the island's El Nuevo Dia newspaper reported that Gómez took a two-week vacation shortly after Maria made landfall on September 20.

Buchanan, a three-star star general and commander of US Army North (5th Army), arrived in Puerto Rico in late September as the military was tasked with improving distribution networks of relief supplies.

"The cessation of General Buchanan's work does not mean that the military is leaving," Rosselló said in a statement. "His departure marks a positive transition. We have not finished the recovery, but there is progress in the missions that have been carried out."

Buchanan will be replaced by a two-star general, according to the governor.

"From my perspective, we've moved out of the crisis," Buchanan told reporters.

"We're moving out of response and most places are moving on towards recovery... FEMA is going to be here for very much the long term and the rebuilding effort, and we in the military generally don't do that."

The changes come as the island's government faces questions about the official death toll of 55 from the massive storm.

Government officials acknowledged this week that nearly 500 more people died in Puerto Rico in September than in the same month the previous year.

An official with Puerto Rico's forensics institute told reporters that 472 more people died this September than in the same month in 2016 -- up from 2,366 to 2,838.

Wanda Llovet, director of the Demographic Register, said there were about 82 deaths a day reported from September 1 through September 19, compared to some 117 per day during the last ten days of the month.

"We are not going to say there could be more or less," Pesquera, whose oversees the count, said of hurricane-related fatalities. "We've quantified the number of deaths."

Pesquera has staunchly defended government efforts to generate an accurate count under extremely trying conditions: most lines of communication were cut and many roads on the island were initially impassable.